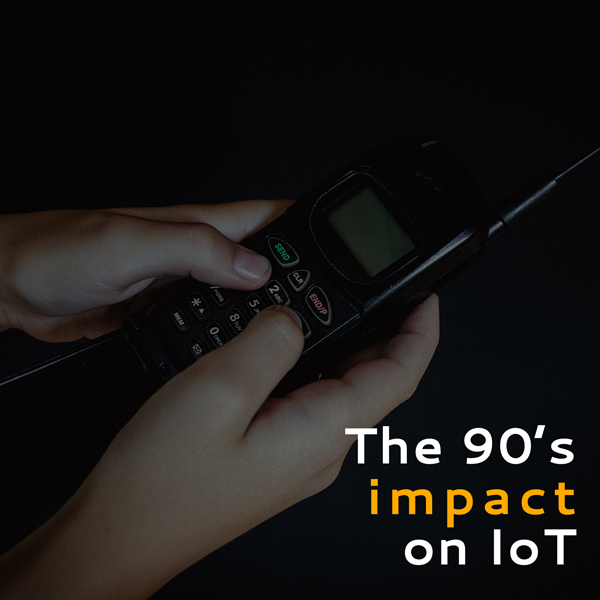 Do you remember the 90s? I for sure do. That is when I started in this industry, and that was about the same time the connected machines began. This starting point when machines got connected led to the M2M era. M2M means machines that are talking to each other using various standards. M2M later led to IoT, things talking to other things in a less constrained environment than M2M.

The 90s impact on IoT

The 90s have had a massive impact on the coming 5G and IoT rollouts. The 90s contributed with many innovative things that impact our lives today. Google was founded; that is one very important thing. But when it comes to the Internet of Things, three important milestones from the 90s are super important today.

The first milestone is the GSM networks. So what does that have to do with 5G and IoT? I think there are many things we can learn from GSM technology. First of all, we have connected almost the whole world using one standard. We have been able to have a network for humans and devices sharing the same infrastructure. And the operators have learned a lot every day for 30 years from this technology. Nowadays, SMS messages are delivered in real-time, even on New Year’s eve. There is an overlapping base station infrastructure, and there are reasonable backups. All this work over the last 30 years led to stable, scalable, and available networks. And they use a spectrum that is not free for everyone to use, meaning the wireless connection is more secure than many other technologies.

And these are very, very important factors when you look at how to connect your IoT devices using 5G technology. Honestly, you will have to look hard to find another wireless technology that has similarly proven stability.

The second milestone from the 90s is, of course, the internet. Looking back at the internet today, 25 years later, it’s something that is a part of everyone’s life. In eight to 10 years, we will see that the Internet of Things has become the exact same thing—something we take for granted as a part of our everyday life.

The Internet of Things

The third milestone from the 90s is the term the Internet of Things. Kevin Ashton said in 1999 that “the Internet of Things has the potential to change the world, just as the internet did, Maybe even more so”. Now, some 23 years later, this is still super-relevant. I think that one is spot on. IoT will evolve into something fundamental in the coming 8-10 years, something we have only seen the start of.