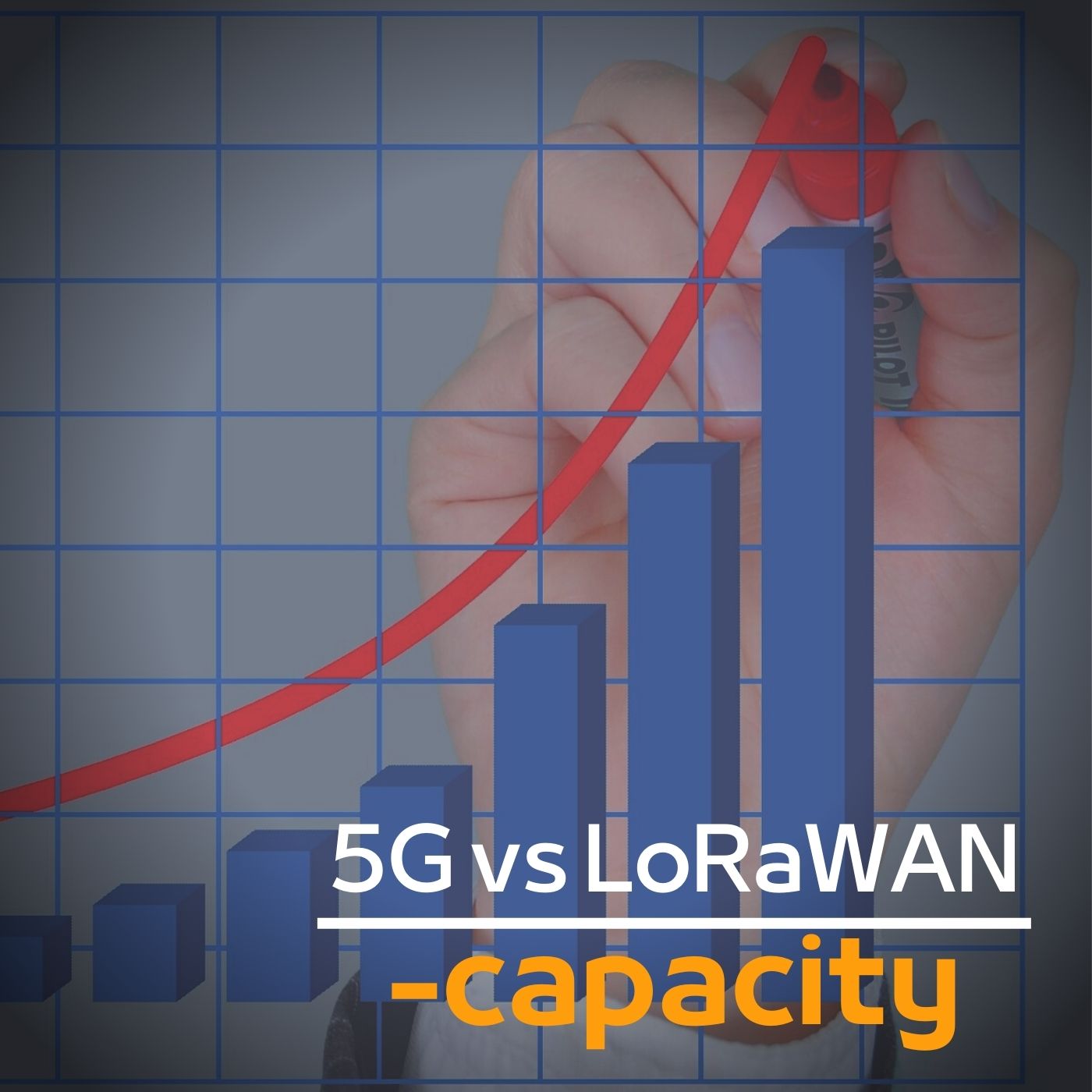 I am continuing with the sixth post in my series LoRaWAN vs 5G. I was invited to speak about 5G at a LoRaWAN event (ThingsConference 22nd of September 2022), and this post will be published after the event. To be prepared, I found it appropriate to dig into the aspects of LoRaWAN vs the current 5G standards for LPWAN. In the last post, we compared roaming. This post will focus on capacity. Some of the earlier posts were referring to a comparison from LoRa Alliance; this topic is not exactly there, but I can find the infrastructure comparison by LoRa Alliance:

Ok. Yet another statement from LoRa Alliance that is a bit hard to understand. So the impression I get is that LoRaWAN is easy, quick and cheap to install. Versus the LTE networks or 5G, where you must build upon existing networks. However, LoRa Alliance is yet again missing that there are private and public networks for 5G.

For all of you that are unfamiliar with the Capex term, here is from Investopedia:

Ok, so the investment in hardware is long-term. Good, I want that because the idea, after all, is to put stuff on the market that will live for years, right? The same site mentions that “OpEx often has a useful life of one year or less, while CapEx tends to have a benefit to the company for greater than one year.” Great. That seems to be the case with a LoRaWAN or 5G investment. However, this will be addressed in my next blog post. 5G hardware usually costs more. So the statement is sort of right.

The capacity of 5G

The 5G standard supports massive IoT. Massive IoT means that it should support 1 million devices per square km. It is the 5G-standards limitation, but the operators must build the networks accordingly. In the early days of IoT in the 4G networks, it was easy to implement CAT-M1 but more challenging to implement NB-IoT. However, with 5G, these two standards are relatively easily implemented in the new 5G-base stations; it is straightforward for the operators to change the system software and put them to work. They can also adjust the base stations so if more capacity is needed; it can be added remotely. Of course, it also comes down to how much data is sent on the channel. Unlike LoRaWAN, the traffic from other users on the channel will not have to be considered to the same extent.

The capacity of LoRaWAN

When it comes to LoRaWAN, it gets a bit more unclear. A good starting point is to read “Investigating the practical performance of the LoRaWAN technology” by Joakim Eriksson and Jonas Skog Andersen. Chapter 2.5.1 LoRaWAN – Simulations, calculations and general discussion. This one contains many facts, and the report deals with interference from other technologies on the same frequency bands and collisions on the bands from other LoRaWAN networks. If you read chapter 2.5.1, you will find references to several reports. This points out that:

1. The frequency problem
Adelantado and others wrote an article in IEEE Communications Magazine 55.9 (2017), “Understanding the Limits of LoRaWAN”. The authors have tried to create an understanding of the limitations of LoRaWAN. They conclude that LoRaWAN faces several problems regarding actual capacity for large-scale deployments. The main problem the authors address is precisely the regulations on the use of the frequency bands, which the authors argue limits network capacity and scalability.

2. Density
Varsier and Schwoerer simulate how many gateways are needed to retrieve metering data in a smart meter collection application in Paris. An interesting result is that 19 gateways would be required to achieve a quality level of 98% when trying to cover an area of 17 km2. An important reservation they make for these simulations is that they assumed that there was no other external traffic interfering in the simulated area. The authors argue that the quality could be much worse in a real scenario.

How many devices can be deployed?

To best understand how many devices can be deployed in an area, I found a report in the International Journal of Distributed Sensor Networks Vol. 13(3). The article was published by Marko Pettissalo as well as Juha Petajajarvim, Janne Janhunen, and Konstantin Mikhaylov, all from the University of Oulu called Performance of a low-power wide-area network based on LoRa technology: Doppler robustness, scalability, and coverage.

The team presented results where they simulated different payload sizes and uploaded frequencies, for example, 8 bytes once a day. With that metric, a single LoRaWAN gateway can support more than 40 million end devices. But this requires all channels to be used without any other users and with no interference. It requires 6+1+1 channels for the communication used 24/7. Implausible scenario. Using a single channel 24/7 would mean something like 3 million users, considering no repetitions and no other users. For more frequent uploads having 60 seconds report periods with just 1 byte of data, 8-35 thousand end devices can operate in a cell with the same restrictions as before, with no other users, using all channels to get the highest figure.

A disclaimer here, almost half of the total throughput for the 6+1+1 configuration is provided by a GFSK channel with a maximum communication range of less than 1.5 km. Most end devices must be grouped near a gateway, especially those needing high throughput.

As pointed out in this report, the other issue that limits the scalability of a LoRaWAN is the downlink communication and data sent to the device. The amount of downlink traffic needs to be minor, and the downlink packets may experience long transmission delays. A setup like this also means that devices’ firmware can not be updated. There is no room for that. So if anything needs to be changed, it has to be done by travelling to the device. From a security aspect, a worthless solution.

Secondly, according to this report, acknowledgements by the gateways have to be used carefully since they reduce the on-air time available for actual data transfers.

Let us look at the LoRa Alliance statement again.

So the infrastructure that LoRaWAN uses is not easy for an end-user to control or build. You are either skilled and know how to do this yourself with all that comes with such an undertaking. Or you rely on a LoRaWAN operator. There are many similarities, but I would put it like this when it comes to infrastructure:

The next post will cover the cost of ownership.